​Dave started serious riding in 2002 while living in the state of Rheinland Pfalz, Germany. Once he returned to the

States he shared a car with his wife so the bike became his primary commuter vehicle. It also became a way to

maintain his cardio fitness after injuring his back and knees and being told he couldn’t run until those healed.

It has also become a way to battle weight gain, a constant fight for him since his thyroid cancer.  His morning

commute is five miles from driveway to driveway, but he stretches the morning rides out to 30+ miles and then

does a straight five mile ride home at the end of the day.  Dave has completed the National Bike Challenge

two years in a row, this year completing over 2,047 miles between 1 May and 30 September. Dave’s primary ride is a 29’er - a GT 4.0 Karakoram outfitted with two NiteRider 750 lights for the early morning commute. In addition, he has a 1993 Trek 2300 road bike which he keeps in the office for days when he can get in a quick ride at lunch.

When not riding the bike Dave is busy writing. He has written for several Apple related web sites, is a technical reviewer for SANS Ouch! Newsletter, and currently working on a short story of his own. He also has an interest in photography and is a self-proclaimed MacHead, having used Apple computers since 1979. In addition, he is also the President of the Schertz Citizen’s Police Academy Alumni Association and works to foster a closer relationship between the citizens and the PD.

We want you to be our next featured rider! Contact us today. 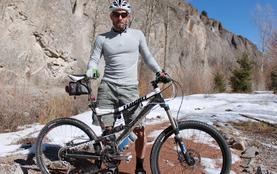 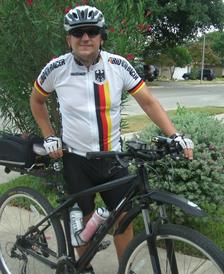 from racing in 2003 and truly started riding for himself, which he says is much

more fun, in 2008. Back in the day, Howard's racing specialties were BMX, MTB and Road. His favorite North American race was the ABA GrandNationals in OKC and in Europe, he enjoyed road racing in Basel, Switzerland. Now, he perfects his skills on bikes with flat handlebars;

both BMX and MTB. Lake City, CO is his favorite place to ride off-road, and for pavement he prefers a Sunday morning ride in San Antonio, TX.

When he is not riding a bike or working at the bike shop, Howard can be found living life with his wife, Cristina, and two daughters, Maia and Chloe Rose. He actually likes doing yard work and enjoys reading magazines and watching movies. His favorite films currently include, Jeremiah Johnson, Butch Cassidy and the Sundance Kid, Eastwood Westerns, and the new Star Trek movies. If Howard's life had a soundtrack, it would include everything from Dean Martin and Glen Campbell to Monster Magnet.

If not for bicycles, Howard says he would most likely be incredibly bored when he was not teaching history.